As mentioned in my previous post, I simply had to share my thoughts on Hollow Knight in its own essay; condensing them into a paragraph would’ve been cruel thievery since there’s just so much to talk about. While I waited to post this, I am still writing it before I planned to. I wanted to achieve the Platinum Trophy before writing this review, but I’m starting to see just how long that’s going to take. Although I only have four trophies left, they will most likely take around 20 hours of gameplay to earn, and this entire week would have to be devoted to playing in order to achieve that.

Anyway, I feel as though I’ve played enough of the game to feel confident in my opinion (58 hours, 107% completion) and that it will most likely stay consistent over the next few weeks, at least. That being said, let’s just jump into it!

Since this game was released in 2017 and I’m far from the first to publish a review on the game, I thought I’d structure mine differently; as if I was pitching it to a friend so that they’d buy it and we could talk about it. First and foremost, let me define the words in the thumbnail.

Why is Hollow Knight “enormous”?

Hollow Knight is enormous not only in the size of the map and content but the story as well, most of which the game is extremely humble or even shy about revealing. There are so many areas that are kept completely hidden, and a good dozen to two dozen characters that you’d most likely never meet if you didn’t seek them out. After about a dozen hours of gameplay, I looked up the map of the game and was absolutely taken aback by the sheer magnitude of surface area. I mean… look at this thing! 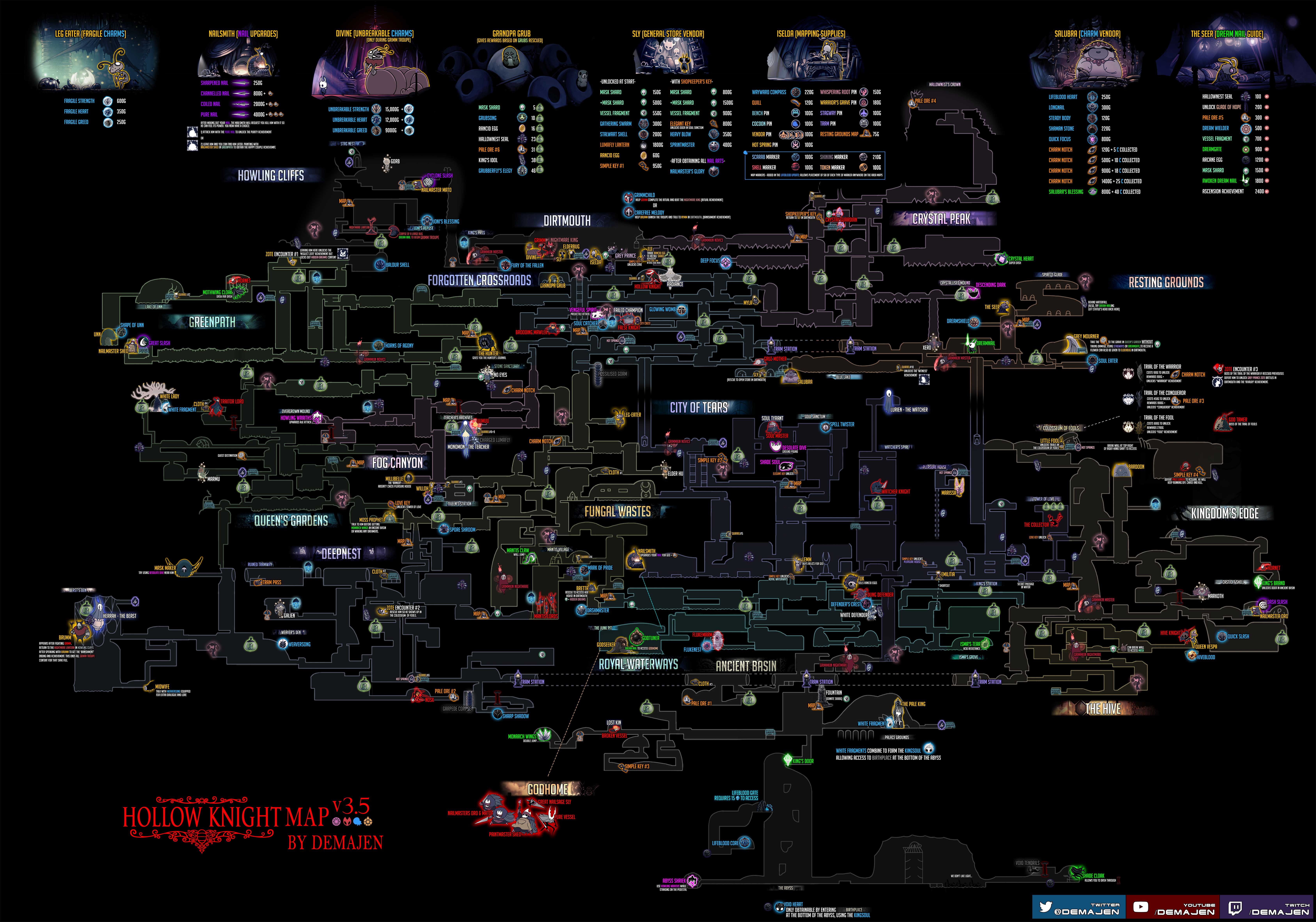 Size and quality can be mutually exclusive, but developers Team Cherry squeezed every ounce of creative ingenious they had into every square foot of this map. Each area has its own unique threats that reside in each different setting, and even though exploring sometimes feels like being trapped in a loop, walking around the map is an exciting and refreshing experience.

There is so much to do from hunting for collectibles like Mask Shards, Vessel Fragments, Charm Notches, Charms themselves to characters, cartographers, geo, and objectives that you’ll have absolutely no problem milking dozens of hours out of this game without even realizing it.

That brings me to my next point…

Why is Hollow Knight “rewarding”?

In this game, I compare the value of reward with the magnitude of the challenge. The higher the challenge, the higher the reward; I’m not just talking about in-game prizes, but the real-life feeling of pure confidence, relief, and pride when you finally overcome an enormous obstacle. For me, having just beat the Trial of the Fools was that obstacle. I tried for two days to finish that, always dying near the middle. For some reason, I beat the whole thing earlier AND I went into the final boss fight with full health and soul. How that happened, I don’t know, but the same feeling of victory washed over me all the same.

Hollow Knight is packed with moments like these, all throughout the game. From exploring, to chasing an objective, to venturing towards your next boss, or trying like crazy to find a bench to rest and save at, you’ll be challenged with AI that will test you in every way. Your resolve will be strained of everything you have, controllers will be thrown, tables will be flipped, and souls will be sold on the way to victory but once you finally emerge with that win under your belt, the world will feel as though it’s yours.

Hollow Knight is just about as rewarding as it gets… because it’s as challenging as it gets. Or I’m a little b*tch and need to git gud. Either way, I’m happy with what this game offers in terms of payoffs, especially because the reward is more valuable in real-life than in Hallownest.

My final alluded point is that Hollow Knight is a “Classic Epic.”

While this one is most likely easy to define without even having played the game, there are still points I’d like to make. On the surface, it’s looks like if the DNA of JRR Tolkein, Edgar Allan Poe, and HP Lovecraft was spliced into an author who grew up in Ancient Greece, that he would write a story like Hollow Knight. And… I mean, yeah, that’s a pretty accurate assumption. That was just a guess? Wow. Nevermind, I guess I don’t need to define that as much as I thought. Good job.

I suppose my final point is that Hollow Knight is only 10 bucks. This is a game that I honestly consider buying for my friends not only because they should 100% play this game as soon as possible, but also because I just really want to support Team Cherry. A game that offers dozens of hours for 10 bucks… and it includes three FREE DLC packs that each offer so much more gameplay? C’mon, this just sounds like it’s too good to be true. It’s true, and it’s still too good for any of us to deserve. If you are the least bit unsure of what to do some evening or weekend in the near future, just pick up Hollow Knight. If you have no interest in playing a game for 50+ hours, then just pick it up to send a message…

I choose to support Team Cherry via Hollow Knight because they deserve these 10 dollars more than almost any Triple-A developer or publisher that could be named (save for Insomniac who have taken such good care of its fanbase). Making an enormous game available for the low price of 15 dollars is crazy enough, but delivering 3 challenging DLC updates that alter the game entirely for free is saint-like. The way they treat their supporters, fans, and gamers is almost too lovingly. Is that a thing? Have I been primed to expect shady back-handed anti-consumer practices in all games at this point? Talk about being rewarded, Team Cherry is just the greatest. And here is my 10 dollars.

That’s what you say, word for word. How did I guess that? It… was magic. I’m a mind-reader.

So, I hope this little “review” reaches the skeptics and provides enough subjective reasons to give this game a shot. There are too many reasons to say no, and given that I haven’t written a stand-alone review of a game… ever, might just be another hint to get this game right now.

As always, thanks for reading and I’ll see you soon.

And thanks for playing, too. This game means a lot to me and I never even heard of it before a week ago.