As I continue mopping up my low percentage PS4 games, I’m left feeling hollow from the focus on trophies at the (usual) expense of narrative. Just today I played through a game four times hunting for trophies, and I honestly couldn’t tell you much about the story. Granted, it pretty much changes every playthrough and has multiple different endings but still, the point stands.

So, this week I played a few games many times. And raised my Completion Percentage from a 48% average to a 51.31%. Aside from watching Community every night and whenever I create thumbnails (that I hardly ever end up writing anything on) or creating my Google Doc stuff, I’ve been trying to grind out those trophies….

I mean… these spreadsheets don’t make themselves and Community is fun to listen to when formulas and formatting get tedious. Anyways, here is my week in entertainment: 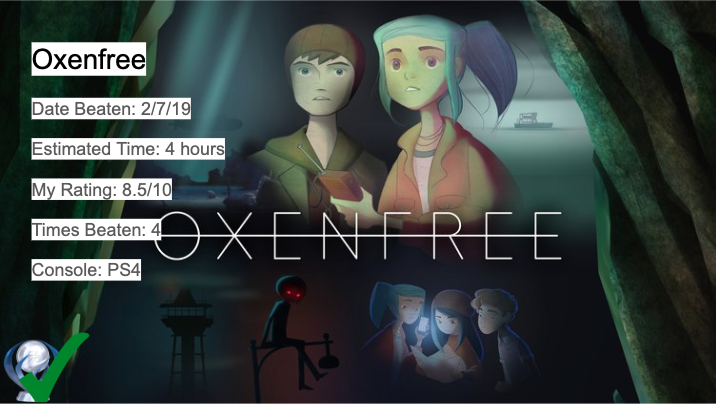 Oxenfree was a game that I started, played for about 40 minutes, stopped, picked it up after a week, played for another 20, stopped, and pretty much left it alone. This was 2-3 weeks ago, I believe, and I really didn’t have any interest in going back to it. That being said, the 0% Completion was driving me crazy so I thought I’d just power through the rest of the story and be done with it. As you can see in the above picture, I played it four times this weekend.

The trophy list asks you to complete the game with different endings, or accomplishing different things (such as relationship statuses between characters) and that requires a new game each time. The only other game I’d done that before this was Alien Isolation and one game after this) and I ended up hating that game after the third playthrough. Here, though, I still really love it and would happily go back for round 5. Honestly, if you get a chance to play this game at any time, please try it out. It’s a brilliant darling of a game.

When I 100%ed Far Cry 5 last July, it didn’t have all of this DLC thrown around to lower my completion percentage; with New Dawn coming out (the first direct sequel in Far Cry history), I thought jumping back into the universe would be fun. For the most part, it was an absolute blast. Hours of Darkness and Lost on Mars both offer fun open worlds to explore. Hours of Darkness is a bit more like Far Cry 2-4 and Lost on Mars is more like Far Cry 5 and Blood Dragon. They were both a lot of fun but Hours of Darkness gave me much more of what I was looking for in a stealth-heavy tour through the jungle.

This is yet another addition that sort of wore out it’s welcome after the first playthrough and, thanks to trophies, I had a couple more to go. The second playthrough was much more stealth-based and centered around survival while the third playthrough was pretty much just f*ck-yeah-Rambo-time and although these experiences differed quite a bit, it wasn’t enough to really warrant multiple playthroughs. Still, the highest completion percentage I achieved was 75% and I played for nearly 2 hours. If you were going to give this game more time then you could certainly squeeze out more things to do.

Here’s the DLC that most resembles Blood Dragon, the game that I remember most fondly in the Far Cry franchise. And while this most certainly stays true to the style and humor of BD, it just doesn’t have the same tongue-in-cheek magic. What was subtle in Blood Dragon is blatant in Lost on Mars and due to that, a lot of the beats feel forced instead of natural. This, like Bulletstorm, feels heavily inspired by 2000’s sci-fi which, as everyone knows, is pretty much the least imaginative of them all. On top of that, this four-hour campaign is just fetch-quest after fetch-quest: go here, kill this, repeat 25 times. It got old very quickly, especially because there are only really four types of enemies on repeat. It’s enjoyable enough, and I’ll most certainly return to it, but it isn’t exactly what I had hoped it would be. 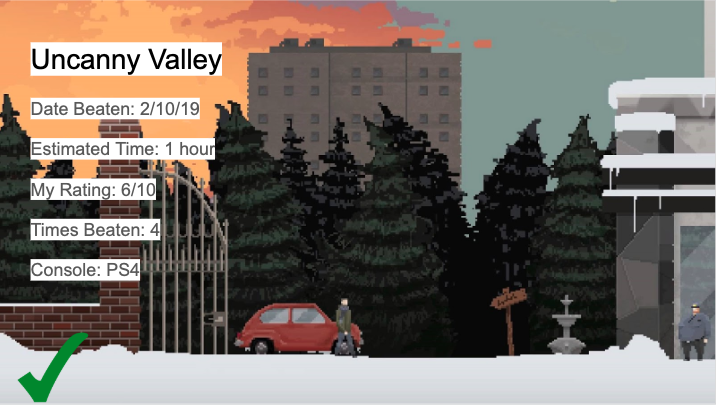 Here’s a game I’ve alluded to twice so far in this post: the one I played a bunch of times and have no idea what it’s about, and a game that I’ve played four times for trophies (after Oxenfree). Before I go into what I think about the game, note that My Rating above should say 3/10 instead of 6/10 because, well, I have that power. Also, I’m still learning what I do and don’t like in video games so my opinion is hardly convincing to even myself.

This game is a 2D side-scroller in the style of, I don’t know, 1990’s PC games? Except that instead of simply going left to right in order to get from checkpoint to checkpoint, you could go left or right, and each direction leads to 100 different doors and you have no clue what to do or where to go. It’s pretty much a nightmare. You sort of just keep exploring until you something happens and hope that whatever happens puts you further in the story. As mentioned, it’s pretty much a nightmare.

When I bought Okami last week, I decided to get a few more indie games from the “People Who Bought This Also Bought” section, and this was one of them. I really had no idea what to expect aside from the appearance of being a cute 2D side-scroller with a fascinating art style inspired by the tribes of Alaska. And, well, that’s exactly what I got. This game is quite culturally inspiring and allows many opportunities for the player to deepen their knowledge and understanding of native Alaskan tribes.

The reasons that this game is just “okay” in my eyes are mostly due to glitches experienced during gameplay and that it feels (save for one moment) largely flat. I just wish there were maybe some cutscenes that expanded on the relationship, or that more time passed so that I got to see more about these people (or the culture). It’s a little indie game so I’m aware of penny-pinching required to make something as inspired as this, so I can’t complain too much. I suppose it was what I expected that sort of paved the way for slight underwhelming results. I’ll play the DLC this week in order to approach at least one part of this game with more of an open mind.

Anyways, that was my week in entertainment (aside from Community, I’m finishing up the fourth season tonight and will most likely just do an entry for the entire series once I get through the next two seasons this week), but I also completed one of the goals that I’ve had for the past few weeks when I finally got this trophy in Hollow Knight:

And it only took 78 hours of gameplay to do so. Just one more in this game until I get the platinum and at that point, it won’t be the game that’s taken me the longest to complete but it will most certainly be the one I’m most proud of.

This upcoming week, I’m going to finish Community (Seasons 5 and 6), Outlast and the Whistleblower DLC, Virginia, ADR1FT, and get started on Okami as well. Maybe I’ll continue mopping up some DLC for games, not sure yet. You can follow my progress on PSN at BSchwarz95 to know for sure.