The Apocalypse Suite is the first mini-series in this comic book saga, the one in which we are introduced to the titular Umbrella Academy. The Umbrella Academy is a group of superheroes that all have one thing in common: they were born at random places in the world, all to different mothers, but all at the same time. 43 babies were born in that moment, however, only seven survived long enough for Mr. Hargreaves to adopt them and raise them together. Around 20-something years later, they reunite after learning of Hargreaves’ death. It’s unknown what killed him for certain, but the estranged siblings have more than enough catching up to do if they’re going to consider being a team again.

The first few chapters (issues) in this book are more so expository than much else; we get a sense of who each of the six children are, as well as their relationship with each other. I am going to spend the rest of this paragraph telling you as much as I know about each of the children. Number 1 is called “Spaceboy” because his ventures into space are a defining characteristic of his. Although, the only surefire detail I remember of this is that the first time we see him (present day) is on the moon. Number 2 is called the “Kraken,” and he’s sort of the wildcard of the group. Nobody really knows if they can trust him as he’s always doing things that seem to be done out of spite. Number 3 is a girl with purple hair. I don’t know much else about her aside from the fact that she doesn’t use her powers that much. Number 4 is called Seance and he also gets very little said about him; we get details of his powers one time in which he speaks as a person who has already died, hence his name. Number 5 is probably the most well written and fleshed-out character in the entire book. He is able to time travel, he’s about 60 years old, but stuck in a 10-year-old’s body. And he’s a genius. His codename name is…number five…? Number 6 is totally MIA, possibly dead. Referred to as The Terror (Horror? Terror…I think). Number 7 is the second strongest character in the book as she, I can’t remember her name, takes a huge role in the story. She doesn’t have any powers that I can remember aside from being musically gifted. And finally, Pogo. Pogo is like the “Mr. Alfred” of the Umbrella Academy home. He’s a great friend to have around because he cares deeply about each of the children, more so than Mr. Hargreaves ever did, by the sound of it. And his name is the only real name that I know.

As you can see, a lot of my description rests in ambiguity; I don’t remember much of the details. There are certain panels that stick with me, moments in the story, but the details of the story itself are like teardrops in rain. That being said, I wish there was more– a lot more. More time with these characters would give me a better understanding of who they are and what they’re like, and I would also like to spend more time with them because they’re really growing on me. Number 1 is the leader, but a lonely one who spends more time in space than with anybody else. Number 2 is strong but is traumatized by the memory of his “father” and his childhood as a whole. Number 3 has incredible powers but has no idea how to use them. Number 4 has the facade of being carefree but will die before letting his family down. Number 5 has twice as much life lived as anyone else and the power to see what’s to come, but in the body of a 10-year-old, doesn’t have the sole power to prevent any of it. Number 7 is surrounded by people with powers yet feels completely alone in her normalcy. These characters have such rich potential for a heartfelt arc but I don’t feel as though much of it was used well.

While 90% of the story happens in balloons, 100% of the action happens within the panels so talking about them is about equally important. I’ll be honest, I don’t have the richest history of comic-book readership but I did take a university class on the poetry of comics so I can tell you all about it. While the drawing and coloring made for some of the most beautiful panels I’ve ever read in comics (compared to Hellboy, Asterios Polyp, Black Hole, Maus, Fun Home, Watchmen, Jimmy Corrigan, and Deadpool) very few things compare to just how awe-inspiring the artwork here is. That being said, I felt as though some of the pacing between the panels felt off during action sequences; the time between panels seemed too long at times r me to gather all of the necessary details (not enough panels to showcase everything that needed to be shown). On a few occasions, there were so many details packed into a single panel that I had to reread parts of it. Sure, I may have read those panels too fast but given that I spend around the same amount of time on studying panels, I think some details should have just been moved to a separate one altogether.

Back to how beautiful the artwork is, though… 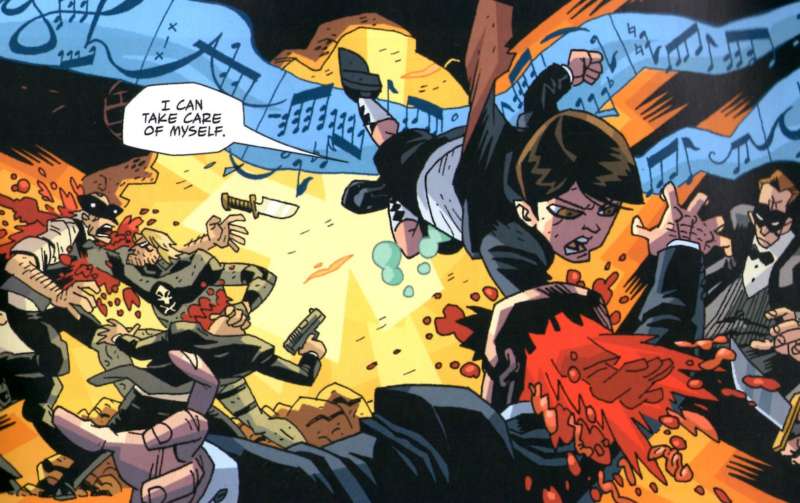 This just makes me want to read the entire thing again; the balance of colors in this one panel is absolutely gorgeous and the story that you get from it is quite expansive (Numbers 2 and 5 shown here). The movement within the art is sublime as well, how it draws your eyes across, down, around, and back again. This panel alone is enough reason to pick up the comic series and read it as soon as possible. So, all in all, I’d say that this is one hell of a read as far as superhero action goes but the story that it gives you could have been expanded a little to give me more of a hint of who each of these people are. After reading, I can remember key moments, scenes, and character relationships but their details have faded and I’d be hard-pressed to mention many specifics about them. That being said, I still have Dallas and Hotel Oblivion to read (although I hear only this first saga is the inspiration for the show) as well as 10 Episodes to watch on Netflix.