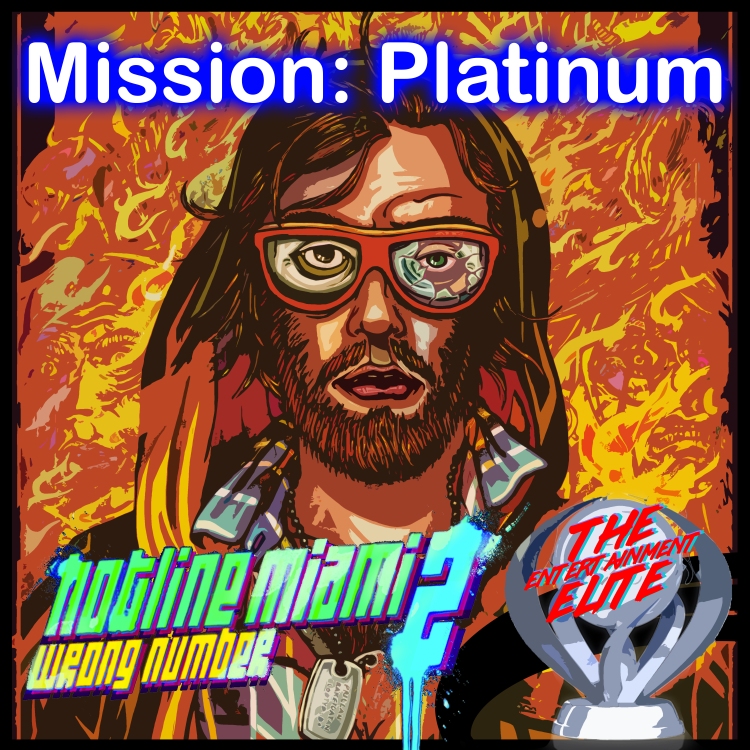 In this new series, I will detail the steps I took to achieve the Platinum Trophy for a certain game. To kick this off, we’ll look at Hotline Miami 2: Wrong Number, which trophies I got in what order, how many playthroughs it took me, the level of challenge or grind, and what I would do differently. So, think “PSNProfiles Trophy Guide” but more of a discussion-themed blog than a direction-oriented walkthrough. So, let’s begin.

1a. …and have fun. In this playthrough, the one and only goal is to beat the campaign. Start to get used to the player characters (the doctor, the fans, and the special weapons/abilities). Since you can’t choose masks before the start of the levels like in the first Hotline Miami, you must now get used to playing individual levels as they’re meant to be played; there’s not as much freedom in how you enter a level but just as much freedom in what you choose to do after that point.

1b. It will also save you some time if you try to use every weapon in the game during this playthrough. If you’re trying to really discover everything this game has to offer (which you’ll have to do to get the platinum trophy) a good place to start aside from just playing is to experiment with all of the weapons. However, this isn’t necessary just yet as you’ll spend a lot of time in each level over the next 25 hours of playtime.

2a. Now we’ll start to look at getting a little bit deeper into the levels you’ll soon master. The best place to start for this would be the levels that have Newspaper Collectibles and Weapons. These are only found in specific missions so it’s best to have a guide out for each one, and put them in mission order so that you can just jump from one to another once you’ve finished your objectives. For Newspapers, you can quit the game as soon as you pick up and read the collectible but for Weapons, make sure you get a kill with it before quitting. To be extra safe, you can finish the floor or level entirely but this isn’t necessary.

2b. Now that you’ve spent more time in some missions, we’re going to go back and replay some levels to get alternate objectives complete. Trophies like Nuclear Waste, Don’t Let Anger Get the Best of You, Got Your Back, Follow The Script, Assassin’s Cred, etc will all be unlocked here. Once you’ve finished these trophies, you’ll know some missions and all charaters like the back of your hand which is necessary for the next step to be made more manageable.

3a. This is where most of the challenge lies for this game at least in the fact that there’s a steep difficulty spike from just clearing the levels to perfecting them. Without a doubt, you’ll need YouTube open while you play this in order to help you. Furthermore, I’d recommend watching how to Ace a level twice before trying it yourself. It’s doable without a guide but there are some secrets that will save you hours of effort if you just know them upfront.

3b. During this run, you’ll also get all of the Combo trophies since high combos are the only way you’ll be able to get high enough grades to get this trophy. If by the end of this playthrough, you don’t have Combo God unlocked, make a point to get it now before we start the penultimate step. Once you beat the final level, Apocalypse, you must sit through the credits until the VERY end.

4a. Everything you’ve managed to learn about the game will now be necessary to beat it on Hard Mode. Now that you know the pros/cons of each weapon, how to handle the characters, and the general layout of the levels, you’re ready to beat the game… but with twists. The enemies are faster, armed with more guns, spot you through the extra windows, more mobsters, swordsmans, and the levels are flipped over the X and Y axiis which means you’re more or less going to have to re-learn every floor of every level.

4b. As with the first step of this guide, it’s all about trial and error. If going left doesn’t work, go right. Don’t worry about your combos or grades or anything, just beat the game. However, there’s one twist: in the level “Subway,” you play as the Doctor but in order to kill the final enemy, you must have beat-down and pulverized at least two enemies which will unlock your “Rage” mode. The game doesn’t tell you this so it’s important you know before you waste an hour playing without success. Also, you have to sit through the credits until the trophy pops.

5a. It’s totally possible that you unlock Genocide during any of the four previous steps, but if you’re like me and Platinum Hotline Miami 1 before playing this, then you’re going to spend more time on this step than you’d care to admit. Since I already mastered the mechanics and enemies, this step took me nearly five hours to complete. Killing 50,000 enemies is easy to do in this game, but the less time you take on steps 1-4 then the more time you’ll take on this one.

5b. If I had to give a tip, I’d say play the level “First Blood” for 15-30 minutes during each of the previous steps. That way, you can keep yourself from doing it for 240 minutes in a row by just breaking it up during your other playthroughs. It’s not hard but the amount of grinding I had to do reminded me of Black Ops III, and nobody wants more of those trophies.

After four hours of continuous genocide boosting in First Blood, I finally unlocked the platinum. Thing of note, though: once I figured out the fastest way to boost kills (5 kills per restart, 10 restarts per second yields 3,000 kills per minute) I was able to speed up the process quite a bit, or so I thought. I was going so fast that my game crashed numerous times and because of that, 50,000 kills was an ever-moving finish line. Based on my math, I should have been able to go from 0-50k in around 30 minutes (accounting for my arm getting tired of button-mashing) but that wasn’t the case. Either my kills reset upon crashing, or the multiplier you get every time you restart isn’t actually reflective of the kills you get per restart. Honestly, the fastest way didn’t end up being the fastest way and the way I would now go about it would be to play through the first part of level 17 over and over again without going for some insane restart speed. This way, you know just how long it will take, and how many kills you’re actually getting.

All said and done, Hotline Miami 2 is a platinum that anybody can earn with enough patience and effort. It only takes 25-30 hours but you’re going to be pretty much doing the same things over and over again during this time. Every level starts and ends the same (enter a building, leave when everyone’s dead) but there’s a lot of fun to be had during your little adventure. There were some times when I thought “Yeah, I’m not sure if I’m going to be able to do this” but an hour later, I’d look back and think about how easy it became once I learned what to do. Trial and error is the name of the game and although it can be very frustrating, it’s also very rewarding.

I put this guide in order of what I would do if I were to get the platinum again, with the important note that you could grind Genocide during the other playthroughs to save your grinding at the end. There’s nothing worse than the final trophy you need for a platinum to be a soul-draining grind. Honestly, I had to keep refreshing my PSNProfile to see if I got the trophy because seeing the same flashy visuals on a .5-second cycle made it seem as though the trophies would just blend in. However, don’t go for this trophy as one of the first because you’ll definitely get at least 25k kills before you even begin step 5. With any luck, you’ll have 50k kills at the end of Hard Mode.

Next up: Enter the Gungeon!

Well, there you have it. Here are the links, videos, and guides that I used to complete the aforementioned steps: